The (real) last fun weekend right before school starts was Labor Day weekend. Back in July, my friends and I had planned a trip to go visit family in Idaho. Brad and I are both from Idaho while Heidi hadn’t really ever been, so, we had a whole weekend planned. It was going to be SO fun. Unfortunately, life happened and things got crazy stressful for my friends. I actually ended up going by myself. It was fun to spend the weekend with my family but I definitely missed my other “family” not being there with me.

I’m a planner. I love having a plan. So, about a week before the “Idaho weekend trip,” I kept bugging Brad to know what the plan was. I felt really bad but I WANTED TO KNOW THE PLAN! Haha. (Heidi had something come up so she had to back out shortly after we had started making plans.) Long story short, he was trying to finalize his new apartment and things weren’t going the way he had expected. He apologetically told me that he wouldn’t be able to make it this weekend. So, at 11:30 Thursday night, I booked a bus ticket home. As excited as I was for the adventures we would’ve had if my friends could come, I was even more excited with the fact that I didn’t have to share my family…or even leave the house if I didn’t want to.

Friday morning, I finished packing and made the short walk over to the bus stop. On the bus, I sat next to a wonderful grandma-aged woman who told me stories of the exotic trips she had gone on with her husband during their marriage before he had died two years ago and showed me pictures of her cute little grand-kids. She asked about my life and gave me so amazing general life advice that I didn’t know I needed to hear until I heard it. It’s pretty cool how Heavenly Father works through others, isn’t it?

Four hours later and a new friend later, I was home! Because Mom was at work and Dad was in Idaho Falls, Grandma and Grandpa had come to pick me up. It was so fun to see them! I chatted with them on the way home. I had a headache so I ended up falling asleep on the couch…and then later went down to my bed. It’s crazy how much I missed that bed. It’s so comfortable.

While I was at home, I got to play Mario Kart with my brothers. They only have three remotes and there were five of us (Nate had a friend over). The way we play is that the first and second place people gets to keep their remote but the looser has to give it to someone that didn’t get to play. It was absolute madness…but then again, that game usually is when I play. I didn’t get to keep my remote for very long. Haha.

Saturday, Mom and Dad took us to go see Cars 3. It’s a cute movie. During the movie, one of the first earthquakes in Soda Springs hit. I thought it was the bass of the movie…or someone shaking their leg really aggressively. After the movie Dad asked if we had felt the earthquake. I got really excited to find out that I wasn’t crazy. Dad also surprised us with ice cream for dinner. So fun. 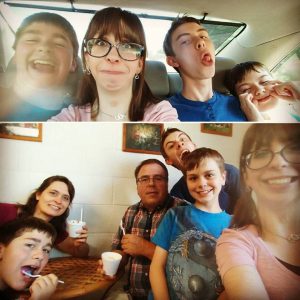 (Oh my gosh! I have a story to tell you…completely unrelated to what this post is about but it’s still funny. I was walking home from hanging out with “my boys” aka Brad, Ben, Sam, and RJ last week and I dropped my phone. I have a case and a screen protector so I wasn’t too worried. I picked it up and saw the camera had several little cracked in it. Litterally the only place that didn’t have protection was the place that cracked! Like, really?! So now all my pictures are fuzzy and/or have a weird glare on them. At the moment, I wanted to cry. Now it’s hilarious. Okay… Now back to what this post was about: Labor Day Weekend!)

I had texted Arie earlier that morning, using a meme (that is our form of communication, tbh) to let her know I was home for the weekend. She got super pumped I was in town and we made plans to go on a hike later that night. So, after I had gotten home from the movie, we headed out. We drove up to Red Hill up on ISU campus. We started making our way down the path and had a wonderful conversation about everything. Man, I miss this girl so much! About 20 minutes into our “hike” it seemed like we were getting further and further away from where we were supposed to be going. We laughed and continued walking. It was sooo pretty! There were sunflowers everywhere!!! Eventually we came to a dead end. We had totally missed the turn off to go UP the mountain! We decided that it was okay because we had natured, gotten together, and still had fun. We turned around and walked back up the path to the car. 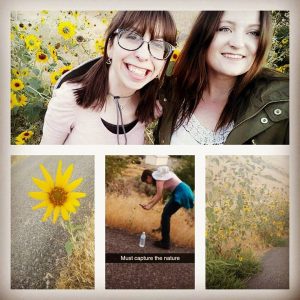 Sunday, I got to go play in the nursery with Mom. I really miss that calling. I miss my little babies. It was fun to see them again. Most of them remembered me… There was one that took a few minutes to warm up to me and realize who I was. I was honestly a little offended but he made up for it in huge hugs when he left.

After church, Rachel came over for dinner. It was really fun to be there with the WHOLE family. No one was missing. After dinner was cleaned up we played games. I love games, specifically with my family. We played Telestrations and Apples to Apples. There were lots of laughs. 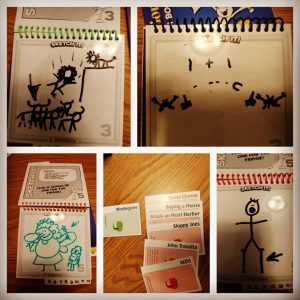 Later that night, I texted Daminica. We made plans to go get breakfast together the next morning. We went to 5th Street and got yummy bagels. It was so fun to catch up with her too. It’s amazing that in the 13(?) years we’ve known each other, no matter how long it’s been since we’ve seen each other, we always manage to pick up where we left off. I mean, we are constantly texting but it’s different in person.

Monday morning after I got back from breakfast, Dad helped me pack up the car and brought me back to Utah. It was really nice to have that two hours with just him. We had a very good discussion about several things. When I was home and settled again, Brad and Heidi texted me telling me that we needed to do something. They came and got me (with Ben and Sariah in the car too). We went to Heidi’s house for pizza, and then we climbed back into the car to go get ice cream. Heidi bought us all $0.59 cones and herself a McFlurry. We laughed really hard at that. 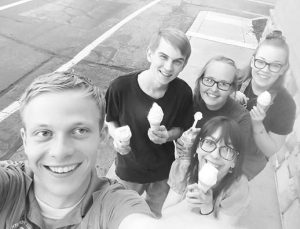 Even though I LOVED being home with my actual family, there’s something about the family you make when you’re on your own. I have said this before, but my friends have become my family. I have a really unhealthy co-dependency thing with a few of them. And I say this as a total joke but there actually may be some separation anxiety there too. Haha!! Love you group of dorks soooo flippin’ much!