I’ve been meaning to make this post since Tuesday. Work has got me going all the time, so on my day off, I’m finally taking some time to write. Haha.

This week I posted this picture with the caption “hashbrown: no filter.”: 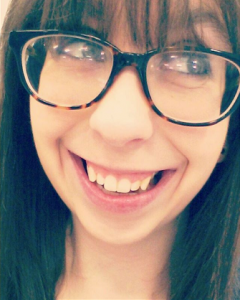 “Hashbrown: no filter” is a quote from The Unbreakable Kimmy Schmit. It makes me giggle because that’s what the character legitimately thinks that “#nofilter” is. I wanted to use the quote so I captioned my selfie with it. I know that it was just a silly quote but as I got thinking, it wasn’t true. I had cropped it, tweaked the colors, AND put my favorite filter on it. 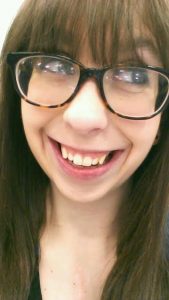 Growing up in my parent’s house, I was always taught to be true myself, not be ashamed of who that was, stand up for what I believe in, and respect others and their opinions. As I’ve become my own independent self, I’ve learned that that advice and guidance is a ton harder to do that it seems. I’ve learned it’s definitely important to follow but it’s hard. I don’t have a perfect life, none of us do. We all have hardships, heartbreaks, failures, or sorrows. We aren’t in total control of what life gives us, but we are in complete control with what we post. I think, instead of asking for support or help, we try to overcompensate with how we make sure others view us on social media. I don’t mean that you should do nothing but complain about your life, but instead of posting the doctored and fake selfie, post the one of you in a messy bun with no makeup, sick in bed and say something you’re happy about. Hmm… I don’t know. 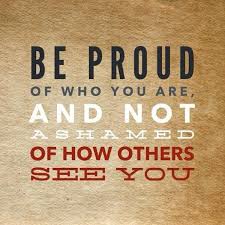 Maybe none of that makes sense. Maybe I’m delusional. Maybe I’m asking too much. Maybe I’m just rambling. Maybe I was supposed to write this for me specifically. This is basically my journal right? Haha. I was on Pinterest the other day and this quote popped up. I think this is a perfect way to end this entry.

I’m making it a personal goal to let myself be vulnerable in my social media. For one week I am going to post one selfie every day, UNEDITED and NO FILTERS with something positive about myself. Next week, I will post on the blog about my experiment…complete with all the pictures and captions. Yayy!Wish me luck!

Hey everyone! This post is pretty much a catch-up and photo dump! Yayy! I’ve been able to attend and be apart of some wonderful weddings/set ups and I haven’t blogged about any of them! So, settle in and I’ll get started.

June 6, 1015: Shannon, my best friend and cousin, got married to the love of her life. It was so sweet and special! Jesse is an amazing guy and I’m so glad that he’s part of our family. 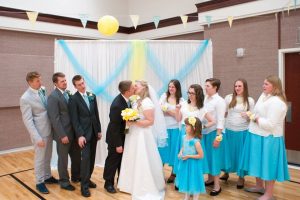 This was actually the first wedding that I had ever brought Lewis to. We had been dating for just under four months! I caught Shannon’s bouquet. My little brother caught the garter. Not knowing what it was, he threw it at Lewis. We were both laughing. He turned to me and asked, “Guess we don’t have a choice now, huh?” We had talked about hypothetically…but not really very seriously. Who knew, two years later, we’d be planning our own wedding!

December 17, 2016: Aleks and Olivia got married in the Salt Lake Temple! I’ve mentioned them before…several times. They are a couple of my favorite people. I knew Aleks before he even started dating Olivia. It’s been so fun to see their relationship grow! They love each other so much and I’m happy that they get to spend forever together.

November 12, 2016: About a week before the 12th, Lewis texted me and asked if I could come visit and go on a double date with his best friend and another girl. I was super excited! I hadn’t seen the girl Jamon was bringing since June! Okay…wait. Let me back up.

During the summer, Lewis went to on a sales job with Jamon. While they were gone, Lewis’s brother was leaving on his mission. Some of their family came down for his endowments/goodbyes, including, his cousins from Washington! The night before Logan left for the MTC, we Skyped the boys so the two brothers could say goodbye. We were over at Jamon’s parents’ house (his family is pretty much Lewis’ family). Jamon saw Jenna, who is Lewis’s cousin and was immediately in love….at least that I could tell. Shortly after the Skype call, they had begun texting/calling but had never actually met in person. So in November, Kathy, Jamon’s mom, had her come down to help with a Sunday lesson. It was secretly a plan to set them up on a real date. Since she was going to be there, the boys wanted to take us out on a double date! It was so fun. The boys were so cute about it. They had planned everything ahead of time and it was all perfect.

Visiting Temple Square in Salt Lake is pretty much a “have to” when you are on a date. So, after lunch, we walked over and took pictures! 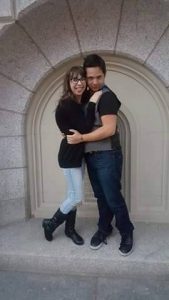 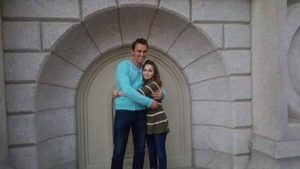 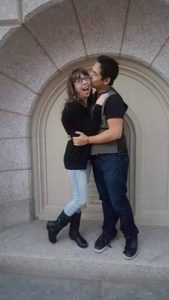 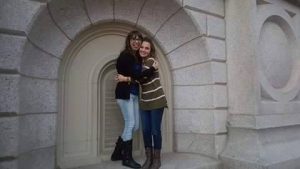 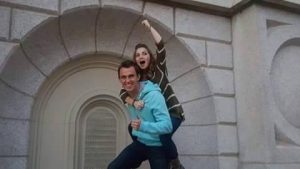 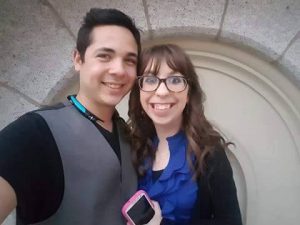 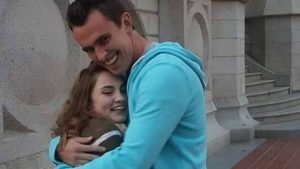 After tons of silly pictures and a tour of the visitors’ center, we started our way over to go window shopping at the City Creek Mall. 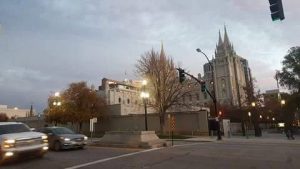 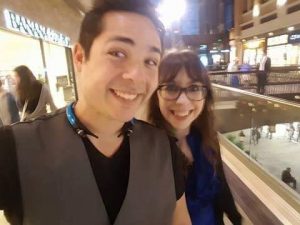 We stopped off at the Disney Store on our adventure. We found princess dresses that fit me and Jenna! The boys thought it was really funny. 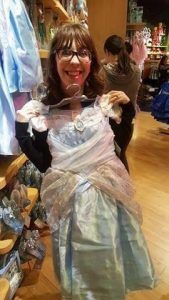 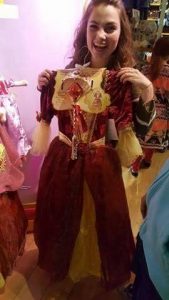 When we were done at City Creek, the boys dragged us over to the Gateway Mall for another surprise. They took us to do virtual reality stuff! (Back story: I am terrified of roller coasters. Jamon lives in Ogden and in order to drive to Salt Lake, you have to pass Lagoon. The boys were teasing us that that was where we were going. Jenna was all for it but I was very nervous and hesitant. I really thought that they were serious!! Throughout the day, the boys kept hinting that we were going to ride roller coasters…. Lewis later asked it I really thought that he would really make me do something that scared me that much. That’s one of the many times I knew that he loves me. Haha.) Okay, so we get into the VR place and Lewis asks if they have four headsets that we could use. He helped me put mine on my head and then grabbed my hand. The person that worked there explained how to use them and then instructed us on how to go to the roller coasters. Lewis didn’t let go of my hand the entire time! It was so sweet. After we got tired of all the roller coasters, we went through the different options. Jamon ended up finding a haunted house that caused him to scream several times. It was soo great! I decided that I’m okay with roller coasters if i’m in a store holding my sweetheart’s hand the whole time. <3 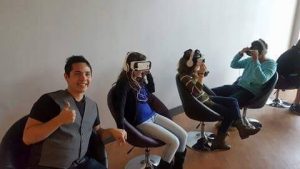 For dinner, the boys had made reservations at The Roof. It’s a really fancy restaurant on the roof of the Joseph Smith Memorial Building. I ate so much delicious food. I think we all went home with “food babies.” It was wonderful. 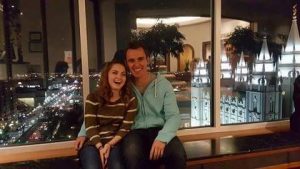 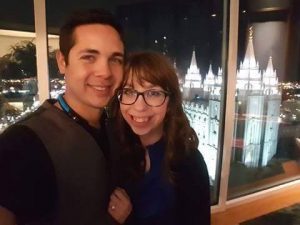 It was a fantastic day. Definitely one for the books, for sure! I didn’t want the day to end. I had such a great time. I love spending time with my boy and our friends.

December 1, 2016: Text conversation between Jenna and I

Jenna: I already had you picked as a bridesmaid for a while but I was like “oh i should probably inform her before she shows up to the wedding as a normal civilian. XD

January 27, 2017: The big day is here! Jenna and Jamon’s wedding!! I got there Wednesday night and was able to stay until Sunday. It was so great! Lewis’s family was there, so I got to see my future inlaws! I sure missed them. The dynamic for this wedding was so weird for me! The Carvers and the Bowens are best friends. All their kids grew up together so they were there for them….BUT Jenna is a cousin on Dad’s side so they were there for her. It was crazy but it was great to see everyone!

Thursday, all the girls went to get mani/pedis! It was sooo fun. 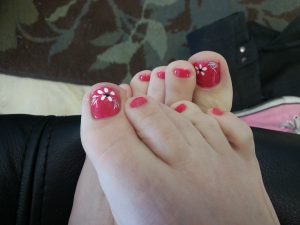 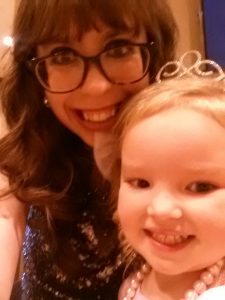 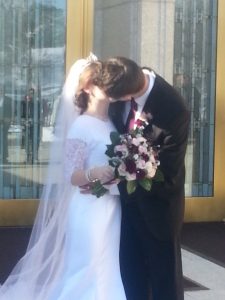 That was such a great weekend! Again, I am so glad that I got to be a part of this wonderful couples’ happy day. They are absolutely perfect for each other.

It’s been amazing to be involved with every single one of these special days because they are all people that I love. It’s been so wonderful to see them find their other half. They have all been blessed with Heavenly Father’s promise to have the opportunity to spend all of eternity with the person they love! That is so amazing to me. With everything that’s been happening, I’m even more excited for my own! Summer needs to come faster! 😉