Hey everyone! I know it’s been a really long time since I posted on here. I apologize for that. I’ve been super busy with a 15 credit semester, getting a new roommate, my boyfriend (*Wait! She said boyfriend?!* Yeah, I did! He’s a cutie too…), loosing wisdom teeth, the lack of a personal computer. I know, that’s a big list. Let me catch you up.

What to start with… Let’s get the fact that I have a boyfriend sink into your minds. Yup, it’s true!

His name is Lewis. He’s from Arkansas and served his mission in Iowa. He currently works for the church in the West Office Building in the IT department and is pursuing a entrepreneurial degree at the BC. We’ve been dating for about eight months. It’s crazy!! We met though a mutual friend at school during a social event that neither of us wanted to be at. But because we are good people, we went to support said friend, met each other, texted constantly, and then eventually (okay the next day) I asked him out. Since that day, we have been pretty much inseparable.

Okay, so this is how it’s gonna work: 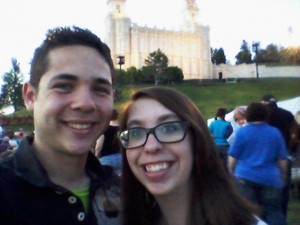 This was the week that I met his family. They had traveled from Arkansas to Utah so his siblings could be at EFY. His parents took us to the Manti Pageant with them. It was a really late night but it was fun. I had never been before, so that was a cool experience. His youngest brother ended up falling asleep on my lap. I think by the time his family went home, they decided that they liked me. His dad said that I could stick around. That’s gotta be a good sign, right? 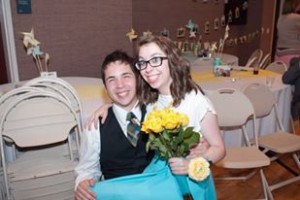 In June my best friend/cousin/sister Shannon got married to a wonderful guy named Jesse. That’s a cute love story too, but for another time. Hehe. Right before this picture was taken, I caught the bouquet that she had thrown. Just after that, Jesse threw the garter and Josh (my little brother) caught it, had no clue what it was, and gave it to Lewis. I was giggling but totally died after Lewis looked at me and said, “So I guess we’ve got no choice now, eh?” We both laughed really hard after that. 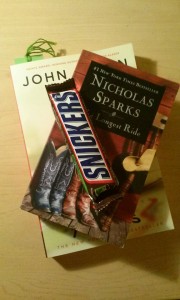 Okay, this year’s birthday was my very first one away from home without my family. The night before my birthday, my sweetheart took me to Barnes and Noble (my favorite store next to Hot Topic) and told me that I could choose a book for my birthday present. I carefully chose my “birthday books” and then gave him the two that I couldn’t choose between. I told him my dilemma, he smiled and walked over to the register. He bought both books!! After we were done, I asked if I could have one of them so I could start reading it. He gave me a really hurt look and told me no. He wouldn’t give them to me because it wasn’t my birthday yet. 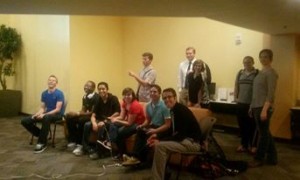 Part II: The next day on my actual birthday, I had finished one of my morning classes and was headed out of the classroom. I was caught off guard when I ran into our friend Cory. (Normally Lewis would be outside waiting for me so we could go to the cafe for an early lunch.) Cory told me that Lewis was in some meeting and that I had to go with Cory to find him. So totally oblivious, I followed Cory around the school trying to find my boyfriend. While we were wandering around the school Cory’s phone rang. It was Lewis! He had called to tell Cory that his car broke down and that we had to go find him and help push his car back home. This was when I had a feeling something was up. When we got outside, Lewis called Cory again to tell him that he was in the cafe. Totally confused and suspicious, I obediently went with Cory across campus to the cafe. There were balloons and streamers on the railings that led downstairs to “our spot”, a present bag and ice cream cake on the table, and friends gathered all around. It was such a cute surprise. 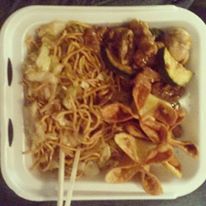 Because “Red Death Week” was upon us, I was curled up on his couch pretty much the whole time. I don’t tend to eat much of anything while my body gently reminds me that I’m a woman. I was starting to get hungry but nothing sounded good. Lewis was listing off food that he could get for me when one of our friends randomly shouted Panda Express. That was it! I wanted that! So, my guy  went and got me some VERY yummy dinner. I will always remember that sweet act of love. 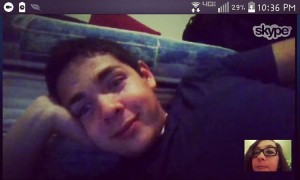 The break between Summer and Fall semester was a full month long. I got to go home and be with my family again, but he was stuck in Salt Lake working. We had such conflicting schedules we weren’t ever able to coordinate a time to visit each other. That didn’t stop us though! We texted, talked on the phone and/or Skyped every single day. It was rough but we got through it and our relationship is stronger than ever! 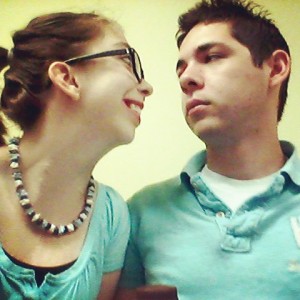 This one is pretty simple. He picked me up for breakfast and we were matching. His face when I walked out was the cutest thing ever! The really funny thing is that we both admitted to changing our clothes two or three times that morning before finally settling on what we actually wore. We have matched without planning several times since then. 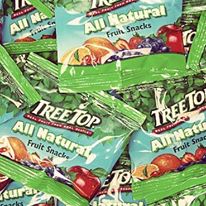 We went grocery shopping a few weeks ago to pick some stuff up for me. I wanted fruit snacks so I wandered over to the aisle and just stared at the shelves. A few minutes later, Lewis came up and asked if I had chosen a box yet. I looked at him and said, “I don’t remember what kind I like…” (I’m weird and will only eat the see through gummies.) He grinned and pick up a box of my favorites. 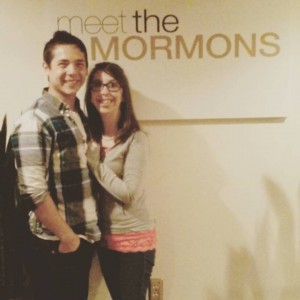 For FHE one night, our ward was supposed to go to the Salt Lake cemetery and take a tour of where the prophets are buried. It sounded really fun but sadly, we got rained out. Instead, we all went to see Meet The Mormons at the theater on Temple Square. I had already seen the movie but it would be fun to go just so I could be with friends. We went and had a grand old time.

We all (everyone who has eyes) tease my cutie about being David Archuleta. He looks a lot like him, especially at first glance. We will all randomly call out “OHMYGOSH! IT’S DAVID ARCHULETA!” at random times where ever we are… It’s really funny to watch him freak out and hide. He won’t admit it, but besides being a look-a-like, he has a gorgeous voice (even when he’s goofing around). Whenever a song by David comes on either the radio, iPod, or Pandora, he will sing along. It’s super cute and it makes me giggle. 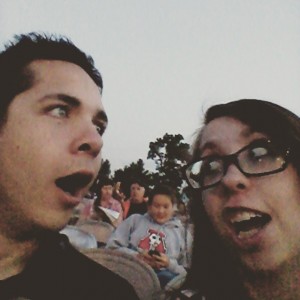 I know I say this a lot but I sure love him. I am so grateful that he is in my life. I know this is really cliche but I don’t know what I would do without him. He has become my friend, my love, and my world.  He has made me absolutely and ridiculously happy. 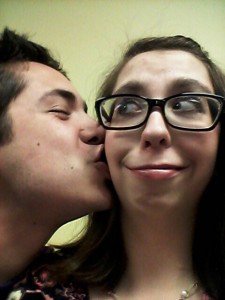