Toward the beginning of the September, Brad convinced me to get a Mutual account (basically Tinder for Mormons). He set it up for me and he did a fabulous job, might I add. About two weeks went by and I was getting messages from some really great guys. They all were super sweet and I really liked talking to them…but it was all virtual. I didn’t know who these guys really were.

One afternoon, I got a “Hi Sarah. How are you?” in my inbox on this app. I replied, “Hey Richard! I’m amazing. How are you,” totally thinking not much of it. Well, this guy pretty much immediately messaged back…every time I replied. It was weird but I really liked it. Haha. So we spent a few days constantly talking on this app. Soon, we were friends on social media and using FB Messenger as means of communication. We did that for a couple days before he asked me for my phone number. We texted on our personal numbers that day. Right as I was getting ready for bed that night, I get a text from this guy asking if I’d be okay with a phone call. Obviously, I was an anxious nervous mess. I was so excited. I told him yes and took a deep breath. A few minutes later, his phone call came through and I answered. We were on the phone for THREE HOURS that night…. After about a week of talking on the phone every night, we started doing video chat! (Since then, we’ve talked or video chatted at least every night before bed!!! Plus, obviously, constantly texting each other throughout the day. It’s been crazy!) 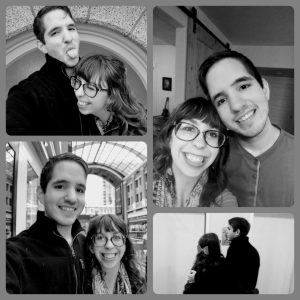 As we talked, I found so many similarities between us. I’ll tell you about when we met later in this post but after he met my friends I asked what they thought. My friends say that he’s a creepy clone of me. I asked if that was a good thing. Gillian said, “Well, we love you…and he’s basically you? So of course we like him!! He’s perfect for you!!” Like he’s literally me but a boy. It’s pretty funny.

Throughout our numerous conversations, the topic about what “we” were doing came up. I mean, that’s going to come up eventually. We both expressed that we really liked the other person and even though we were video chatting and seeing our faces it was all virtual. We needed to actually meet and make sure that the feelings we were having were real and not just twitterpation or the anticipation of potential feelings. A few days after that conversation he told me he was going to be in Utah for family stuff and wanted to know what my schedule was. I had class the Friday he was going to be here but I was going to be done after 11. We planned to meet up about noonish. Oh my gosh. I couldn’t sleep the night before. I was just way too excited.

Friday came and I couldn’t concentrate in class. I needed 12 to come faster!!! When it finally came around, he called me. The plan was for him to come get me and then we’d park at the school because I get parking for free! Yay for student perks!! Anyway, I got a call from him. He was lost… He had been right where he needed to be but didn’t think it was the right place so he left. It was pretty funny. I got him back on track and waited. I got a text telling me he was here so I headed downstairs. As I was walking out of the elevator, this tall guy walked in the door. He had a huge grin on his face as he hugged me. Guys, he gives THE best hugs!! 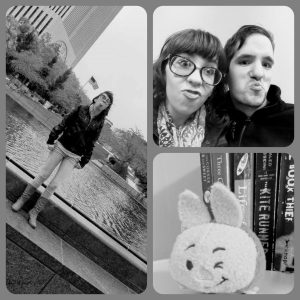 We walked over to City Creek for lunch and window shopping. Oh! The day before our date, he had asked if I would be okay if he held my hand. I admitted that I was hoping we would. Hehe. So, as I expected, he took a hold of my hand as we were walking. I don’t think we let go of each other’s hand all day…unless we absolutely had too. We wandered into the Disney store and he surprised me with buying a little Piglet zum-zum. He lives on my bookshelf where I can see him every time I walk into my bedroom. We then walked over to temple square where we walked around and talked. We touched the temple and took pictures too.

We made our way over to the school to meet up with some friends for dinner. One of the things Richard wanted to do is make dinner for me. Well, because he doesn’t live here and I don’t have a kitchen he’s allowed to be in, we asked Ashley if we could come invade hers. Obviously she said yes. In return, we decided to feed her too. Then we thought it would be fun to have more friends so Ben, Ashley, and Brad all tagged along to the store with us. After that adventure, we went over to Ashley’s house! Richard made dinner while I helped…when he let me. We talked and laughed. At one point, Ashley asked if we were “official” yet. Richard and I looked at each other and he grinned. “I’d be okay with that. Sarah, would you like to be my girlfriend?” “Yes!!” There were hugs and giggles. Ben and Brad returned from what they were doing and knew exactly what had happened while they were gone. It was pretty funny. We ate dinner and headed over to the dance that the ward was having. There we danced, laughed, I saved him from accidentally drinking pineapple punch (he’s really super allergic!), and met more friends. After we got bored with the dance, we gathered a bunch of friends and went back over to Ashely’s house for games! There we also met up with Sam, Jacob, and Warren. About 11ish, people started to trickle home. About midnight we said our goodbyes to friends and left. We still had a little bit before he had to leave. So we went back to my home and sat in the commons and talked. We talked about what our favorite parts of the day were and how happy we were. 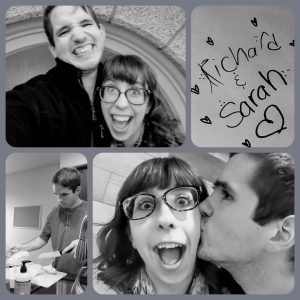 It was such a wonderful day. The whole day was weird though…but definitely a good weird. It was weird because it wasn’t like I had just “met” him. It felt like I was reuniting with my best friend that I hadn’t seen in a long time. It wasn’t awkward, ever! Any silence we had had during the day was full of peace and comfort. The whole day while I was with him seemed perfect. Just everything about it seemed natural and normal!

We’ve only “dated” for about two weeks and only “known” each other for twoish months. It doesn’t feel like it’s been that short of a time. It feels soo much longer. Plus we just kind of automatically clicked from the very beginning!? We were talking about that the other night. I don’t think any of it is a coincidence… I’m pretty sure we knew each other before we came to earth. I know Heavenly Father helped me find Richard. The things that have happened in my life have helped me prepare to be the woman that I needed to be in order to deserve this wonderful man. There have been wayyyy too many tender mercies and divine interventions that could make me deny it. He’s special and I’m so glad he’s mine! I just love you, Richard Jay!!