All my life I have been able to experience what I like to call “all in” syndrome. That’s when you stumble across something new. You love it so much and can’t think or talk about anything else! It’s usually books, movies, television shows, or music. I can categorize my life into stages of what I’ve been obsessed with. Taylor Swift, Doctor Who, Supernatural, Broadway Musicals, How I Met Your Mother, Les Miserables (the movie), High School Musical, Friends, Lost, Tom Hiddleston… Believe me, the list goes on and on. During these “all in” stages, I pick up on really random facts and store them in my head forever. They never leave! Like for instance, I bet you didn’t know that Benedict Cumberbatch’s (Sherlock and Dr. Strange) full name was Benedict Timothy Carlton Cumberbatch or that Jared Padalecki (Sam Winchester) had a broken arm during season 10 of Supernatural because he insisted on doing his own stunts or that Matt Smith (the 11th Doctor) actually hung from the bottom of his TARDIS for the 50th Anniversary episode of Doctor Who because David Tennant (the 10th Doctor) was going to be there and Matt wanted to show off. See?! Weird facts no one wants to hear about! Haha! I have a great appreciation for all of my past and current obsessions.

As I’ve phased in and out of my different obsessions, one has always stuck. Harry Potter. Always! I love the books! I love the movies! (Yes I know that they are so different from each other and yes it bugs me that movies can’t follow the books exactly but I appreciate them as separate things.) I love HP so much! I’ve read all the books – even the silly short stories that J.K. Rowling has written to go with the actual series. I’ve taken all of the Pottermore quizzes. I was sorted into Ravenclaw. My wand is Cedar wood, 10 1/2 inches, dragon heart-string core, pliant flexibility. My Patronus is a Ragdoll Cat. Buzzfeed quizzes have told me that my best friend would be Neville and Luna. My boyfriend would be Neville or Malfoy. My personality is usually Luna or Hermione. Yeah, I’m kind of  crazy. Hahaha. 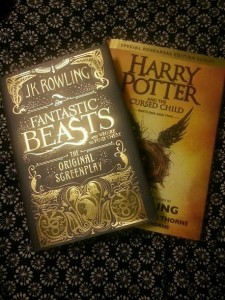 For Christmas, I really wanted the two new books that she’s written. They are screenplays so it’s a different layout but it’s still HP, so I had to have it. It was kind of a late addition to my Christmas list so I wasn’t expecting to be able to read them Christmas morning. When Lewis handed me a box, that after multiple layers of wrapping paper, turned out to be the books I was dying to have, I almost lost it. I was sooo excited to read them. I started Fantastic Beasts that day but kept getting distracted with all of the traditions and festivities that were happening around me.

Before Lewis was scheduled to go back to Utah, he decided that he was going to take me to the new Harry Potter move – Fantastic Beasts and Where to Find Them. I thought that was a wonderful idea because, Harry Potter! I told him that we could go but I wanted to finish the book first. I’m weird like that. By the Wednesday after Christmas I was almost done with Fantastic Beasts. I said goodnight to my family and then stayed up to finish it. I was having mental breakdowns after I was done reading it. For moments like this, I’m so very grateful for my friend Arie…. These are just some of the texts between us that night:

Me at about 1:30 am: “Okay, so i fell asleep on the couch at like 9…. Lewis woke my up around 11ish so I could go to bed for real. Haven’t been able to fall back asleep since I got to my own bed. So what do I do? Well, I just finished Fatastic Beasts! BEST. BOOK EVER. ;)”

(Then we talked about things that happened but just in case you haven’t seen/read it yet I won’t say anything.)

After talk about the events in the book, I said. “I really want to start The Cursed Child but I know that I do there will be NO chance of any sleep ever until I’m done with it…”

A few hours later, I’m halfway through the book freaking out at her still. Thankfully, she had come home late from work and had to get up early the next morning for her play she was in so she was staying up all night, so she was emotionally there for me. Hahah! I came across the biggest plot twist and told her what part I was at.

Me: I CAN’T I HAVE ONE ACT LEFT AND THEN IT’S ALL OVER

Her: You’re not breathing are you….?

At 6:22 am, I sent this final text: I’M DONE!! IT WAS INCREDIBLE! AHHHHHHH! I’m falling asleep so I’ll freak out about it with you in a few hours. Goodnight!

I had finished the Cursed Child, a 308 page book in just under four hours! It was great. I woke back up a few hours later and went upstairs. Lewis was already up. He pulled me in for a hug and a kiss, asking how I slept. I started laughing. “I didn’t,” I said. “I finished my books instead.” Wide eyed stare. “O-okay… Now you can start on the next one.” “No I can’t I finished that one already too. That’s the one I read last night…in four hours.” “It hasn’t been a whole week yet. You’re crazy!” He kissed me again. Even after two years, you’d think he’d be used to how fast I read books.

A few days later Lewis took me to see Fantastic Beasts and Where to Find Them. Eddie Redmayne is my current hollywood heartthrob so it was so wonderful to look at him for a few hours. 😉 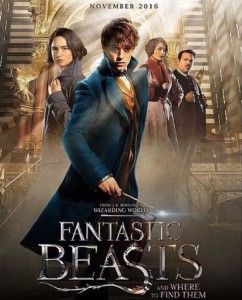 And the best part?! It was just like the book. Granted, the book was the screenplay for the movie, but it was a wonderful experience that the movie followed the book exactly! I was kind of a little more than enthusiastic when something would happen “just like it did in the book” and I could tell Lewis was trying really hard not to be annoyed with me. It’s a good thing he loves me so much right! Haha. Oh, I am so grateful that no matter how old I am or what staged of life I’m in, Hogwarts will always be there to welcome me home.

P.S. I just realized that this movie was the first movie I watched this year (we went and saw it on January 2) so that means that 2017 is going to be magical, right?