I was born in Rexburg, Idaho and cared for by an angel. There was a nurse there after I was born that noticed I was turning blue. She had 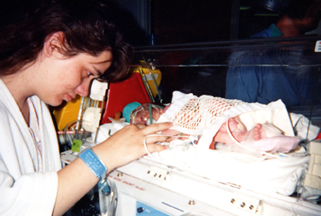 worked at Primary Children’s before, and knew that blue babies that don’t respond with oxygen have something wrong with their hearts. So this angel saved me when she called in the doctor. I was given some steroid medicine to keep a duct open and flew on the life flight jet to Primary Children’s. Once I got there and had some tests done, the doctors found out that I had several heart defects. (You can see some of these defects on the Mayo Clinic website.)

So, when I was 5 days old, I had my first surgery. They put in a shunt to connect my pulmonary artery to the aorta. (The duct that they kept open is the patent ductus which connects these while the baby is developing and not breathing yet. It’s supposed to close off after birth, but that’s the only way my blood was getting any oxygen, so when it started closing off, I turned blue.) A week after surgery, I got to go home.

The doctors were hoping that my ventricle would grow, but it never did. When I was 13 months, I was really purple and had a hard time 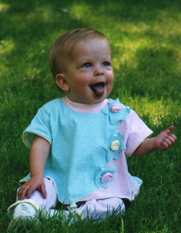 whenever I tried to crawl. I had to fly back to Primary Children’s and had an emergency surgery to put in another shunt and saved my life again. The first shunt was closing off with scar and ductal tissue, and I wasn’t getting any oxygen. That’s when they decided to go ahead with plans to do the Glen and Fontan surgeries, but I had to get better first.

I had my Glen 5 months later. They opened up the septal tissued between the atrium and ventricle and hooked the main arteries from my neck directly into to my pulmonary artery. I had lots of problems after this surgery, and about 5 months and 2 more surgeries later, I was finally better and got to stay at home.

Just before my 5th birthday, I had my Fontan surgery. They hooked the main arteries from the bottom half of my body directly into my pulmonary artery so it now looked like an “H”. With a Fontan, the blood flows from the body and then through the lungs (just because of gravity and pressure), into the single atrium, and then through the ventricle and pumped by the ventricle back out to the body. It’s really weird, but it’s worked pretty well for me!

When I was 10 my protein levels in my blood started going down. This is one of the symptoms of PLE (Protein Losing Enteropathy), where the proteins are not absorbed in the intestines and it makes more fluid to flush it out which causes swelling, diarrhea and vomiting. I didn’t have any of the other symptoms yet, but the doctor told us they would probably come. A lot of Fontan kids get PLE because the blood flow and pressure is all wrong for the other organs in the body.

I had a pretty good, healthy childhood considering all that was going on inside of me. When I got into my teenage years and I’d get a cold or something, it would kick my PLE into gear and I’d have a few weeks with the PLE symptoms. When I was a sophomore in high school, though, the PLE hit really hard. I got so sick I had to stay home from school more than I was there. After months of this and trying some other medicines, I went to the hospital for albumen infusions (IV protein treatments) to raise my levels and see if it would help the symptoms go away. It didn’t seem to be helping, but the doctor kept me there a few days and then started me on a new medicine (sildenafil). Eventually, it helped me get over the flare-up and kept the PLE under control for a while. My feet are often swollen and my tummy hurts a lot.

The October after I graduated from high school, I got a stomach virus that kicked the PLE into high gear again. After a week or so and no 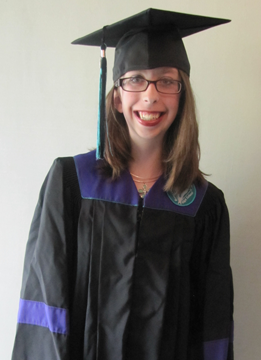 improvement, we were sent back to Primary Children’s where my heart doctors could work with me better. We couldn’t tell if the fever, diarrhea and vomiting were from the illness or the PLE. After a lot of tests, questions and labs, they sent me back home to get better. When the fever still didn’t go away, I was life-flighted again to Primary Children’s (this time on the helicopter) for more testing. My fever was higher and I had a lot of fluid in my belly. They put me on IV antibiotics and we did lots of tests (scans, ultrasounds, tapped the fluid, scopes, etc.) and most were dead ends. We were happy that things looked so good, but couldn’t explain why I was so sick. They finally decided I must have had bacterial peritonitis (infection in the fluid in my belly). They pumped me full of antibiotics and diuretics to lose the infection and fluid.

As awful as that month was, a lot of miracles happened that we hadn’t expected. That was when I got my new cardiologist (Dr. Yetman), who is a heart doctor that works with adults that had heart defects as babies. She’s amazing, and as she helped the teams figure out what to do, she tried some things that adults need that kids don’t. It seemed to work. That trip is also when we started talking about a heart transplant. Fontan kids with PLE just get sicker and sicker as organs get damaged and shut down. A heart transplant is really the only way around that. Another miracle is that because of the scans, we discovered that I have cirrhosis (scarring) in my liver. We never would have known that without that infection and all the ultrasounds and scans to figure it all out. I’m lucky that they found it before I started having symptoms of liver failure, too. There’s lots of other good things that happened then, but the biggest is that is started the wheels turning for my transplants.

I was usually swollen and go to the hospital sometimes for a “tune-up”, but like my mom says, I’m pretty healthy for such a sick kid. I waswaiting for the doctors to decide how to help me now that the Fontan has caused so many problems. But, I wouldn’t be here if I hadn’t had one, so the angels must be still at work all around me.

After being inpatient and living in the hospital for a few months, I got “the call”! I was getting a heart! On April 21st, 2013, my life changes.