On July 31st, Sarah had another transplant clinic visit. Everything looked great…echo, labs, etc. (You’ll remember that she doesn’t have to have another biopsy until next April–unless things look sketchy–so we’re still just watching for symptoms to point to any rejection until then.) We’re happy to report that once again it looks like her heart and body are still getting along very nicely. She did get a stomach bug in mid-July that was still hanging on. They ran more labs and a sample to make sure that she didn’t have any of the nasties transplant kids often get (CMV, rotavirus, and a slew of others). They all came back negative. (Yay again!) But, a week later, the diarrhea still hadn’t gone away, so they reduced the dose of her CellCept (one of her anti-rejection drugs), which can sometimes cause diarrhea, and increased her steroids to keep things balanced. They’ve decided she has norovirus (good old-fashioned “stomach-flu”) that can’t heal completely because of her compromised immune system and the drugs she’s on that can irritate the bowel. They told her to keep lots of fluids in, and we have checked drug levels to make sure they are not being affected too much. Now, a couple more weeks later, her bowel is having good days and not so good days, but overall, things are getting better, and her Prograf level is still perfect.

In clinic, we talked about a few things that were put on the back burner when we were listing her for transplant. We sought permission and direction about having her wisdom teeth pulled, since she wants to be completely out for the procedure. They’re deeply impacted and the dentist says they have to come out. She decided she’d rather do it sooner than later, so we’ll be doing that in the next few months–wherever we can find an oral surgeon that has a dedicated anesthesiologist that’s comfortable working with a patient post-heart transplant. Hmmm…that could be tricky. We also talked to Julianna (our social worker) and she suggested that we get an appointment for the neuro-psych testing we had also wanted to do before Sarah’s listing. She had told us that researchers have found some correlation with learning disabilities, developmental delay, and cognitive function issues in kids with congenital heart defects. Sarah seemed to “catch up” OK after each of her surgeries, but as she got sicker and sicker in her late teens, we could see that her reasoning and memory were genuinely affected. Julianna encouraged us to still have this testing done before she starts college, so she can have a better picture of how she learns best and what areas she might need more help in. Then, in turn, we (and the college) can give her the tools and help she needs to be successful after chronic illness, transplant, and complications/issues during recovery. So, it looks like we’ll be doing that in the next few months, too.

She also asked permission to go to Alaska. Dr. Everitt just laughed, looked at me and said, “Mom, can she go?” She’s so excited to go with Grandma Dixon, and they’ve already bought their plane tickets for nine days at the end of September. They talked about going on this trip to see my sister and her family way before transplant (after her high school graduation), but she never got “better enough” to go. Well, now she is not only better enough, she doesn’t have to have special letters to travel, oxygen on the plane, OR take extra care while she’s there.  I’m excited that she’ll have this opportunity to travel without her parents, and try her independence for more than just a few days. I’m super jealous, but so happy for her to have this experience. 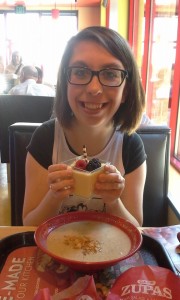 The afternoon was filled with a visit with a couple of darling little boys who have been on the transplant list for more than 100 days and their incredible mommies. Sarah was sad that she couldn’t get close and we couldn’t go in and play (because we didn’t know if she was contagious or not), but it was a life-changing experience for me, being on the other end, and trying to offer hope and love to those walking a similar path. (I’m hoping to share their stories in more detail later, but I need to get permission first.) After the visits on the 3rd floor with them and a favorite nurse, we went to Zuppas Café for lunch. We had delicious bowls of soup, and Sarah had her first crème brûlée. (Kind of a deprived, isn’t she?) After lunch, a nice, young man named Zack took us on a tour of the LDS Business College and introduced her to some of the interior design students. Sarah was enraptured, and that led to her decision only days later to attend in January.

The next day, she had an MRI on her liver. We got a letter a week or so ago that said that her liver is cancer-free, and things look good. Always a relief to get those kind of letters.

So, things are going well for Miss Sarah. Her tummy is getting better, her liver is healthy, her heart is doing an incredible job, she’s studying for her written test to get her driver’s permit, going back to work (full-time) as soon as her tummy finally allows her that freedom, finishing her application to LDS Business College, and preparing for a trip to Alaska. Oh, and she has a couple of weird procedures/tests we need to have done in the next few months. Whew! She seems to be handling the whirlwind of change a little better than I expected. I think I’ll just hang onto her hand and try to enjoy the ride until it’s over. Oh, wait… this IS just the beginning, isn’t it? …Yeah, a great new beginning….