I was talking to Mom a few weeks ago after my first real-life-in person-date with Richard. (We had had a few date nights over skype but this was our first actual date!!) I was just going on and on before it hit me. I had a huge epiphany that I HAD to talk to Brad about! I texted him and told him that I had a crazy realization that I wanted to talk to him about…

Part 1- Remember the trip to Idaho that Brad, Ash, and I took really randomly about two months ago? Yeah, the one where Brad’s car broke down?! So, like I had explained in that post, our original plan was to just stop at my parent’s house for about an hourish. Well, because our transportation quite working, we had to stay overnight. When I was talking to my mom, I realized that I wouldn’t have matched with Richard if we hadn’t had to stay in Pocatello that night! (Okay time line real quick… This adventure took place a few days after Brad had set up my Mutual account and I was kind of obsessed. It’s a pretty fun “game.” Anyway, my little distance setting doesn’t reach up to Pocatello… Okay, carry on.) If the car hadn’t have had called it quits, I wouldn’t have played on Match that night before falling asleep, and I wouldn’t have swiped up on him! And because I had swiped up on him, and was in Idaho Falls the next day, the distance thing reached to Pocatello, he was able to swipe up on me! What?!

Part 2- So, when we were getting ready for the trip, Brad kept saying that he needed to go to Idaho but didn’t know why and that we were supposed to go with him. Shortly after we came back from Idaho, I was pretty sad. Brad noticed and asked if I wanted to go for what I call a “walk-n-talk.” (We do “walk-n-talks” quite often. It’s become a staple in our friendship!) On our walk, I expressed what was going on in my head, he listened and spoke when I was done. He gave me some reassurance about what had been bothering me.  He also admitted something I wasn’t expecting. During our talk that night, he told me that the reason we had to go to Idaho was for me. He had no clue why, but I was supposed to be with him on that trip. While we were in Idaho, he realized that I was the reason he had to go to Idaho. Okay?

Part 3- That next Sunday, I was talking to Gillian, Sariah, and Jen about what I had realized. Brad was standing in our group too, laughing at my explication. After I was done talking, he said, “And what she doesn’t know is that I had been praying to be an instrument in the Lord’s hand a few days before our trip!” The answer to his prayer unfortunately cost him his car, but hey, I got a guy out of it! Brad told me that when Richard and I get married, we owe him a car. 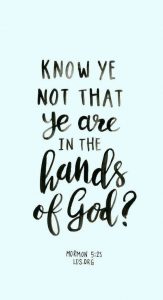 Obviously there are many more things that have happened throughout my life but these three have definitely helped me realize that Heavenly Father loves me. He knows who I am. He knows what I need. He has a plan for me and He knows exactly how to help me achieve that plan. He places people, trials, and blessings in my life to encourage me to become the best Sarah I can be. I know with a surety that I am who I am right now because of My Father. He has helped guide me to this wonderful man that I’m head over heels for.

Heavenly Father is involved with every aspect of my life. I’ve seen it! I’ve felt His love. I’ve experienced his hand in my life so many times. He has been there for me during my transplant journey, my first love/heartbreak, my schooling, my family…everything! I mean, why wouldn’t He be? I’m His daughter. When I think about how much my earthly dad loves me, I get overwhelmed with gratitude and appreciation. Dad has done so much for me in my life. It’s the same for my Heavenly Father. He loves me just as much, if not more than my dad here.

Mormon 5:23 says, “Know ye not that ye are in the hands of God?” If that’s correct, then  Heavenly Father cares about me. He loves me. He wants me to be happy. I know with all that I am that He is very much involved with me meeting and falling in love with Richard.