Wouldn’t it be fun to write an entire post using all the acronyms we’ve learned since the beginning of this journey? Maybe another day. I’ll brush up on my vocab and we’ll do it another time… perhaps a quiz after? For now, how about an update about the next 4 days following our false alarm….

Day 1 in CICU (Cardiac ICU) – We went through and updated history and meds list for ICU and then Sarah had an echocardiogram, started milrinone, and had a 2nd IV placed. She also had her first dose of heparin (shots stink). Music Therapy, Child Life, Social Worker, and Rainbow Kids all came for a visit to determine needs for keeping Sarah and I occupied and sane through this experience. Much sympathy expressed by medical team for our disappointment, but also hope for a better outcome in the future. We were tired and emotionally spent, but not bored enough to nap. We said goodbye to family, played a couple quiet games and tried to stay busy and distracted til bedtime.

Day 2 in CICU – Sarah woke up with monstrous headache and spent the morning fighting nausea and vomiting, pain, and sleep. The Rainbow Kids’ pastor came by and prayed for Sarah. His humble and heartfelt prayers always bring so much comfort and peace. 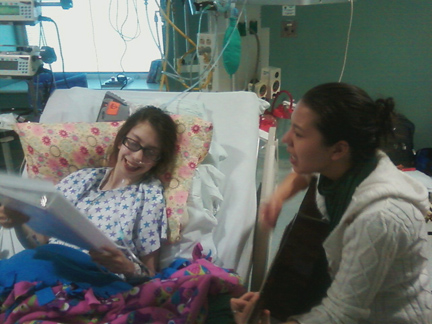 Heparin was discontinued for a bit because of the vomiting. (They wanted to make sure she wasn’t bleeding.) She received some albumen and diuretics through her other IV (the first one was busy with the milrinone). She felt very “tethered”, but by the time her music therapist came in the afternoon, she was feeling much better and smiled, laughed, and for about an hour kind of forgot she was “sick”. Later, we played some games, colored, and planned our evening movie night. After dinner, Sarah ordered some popcorn and ice cream, and we watched Legally Blonde together. Her awesome nurse even moved the bed and helped us rearrange the room so I could lay right next to her in the recliner without craning my neck! We laughed and had a nice time together.

Day 3 in CICU – Sarah woke up happy and feeling so much better! She received a 2nd round of albumen and diuretics and was responding well to the milrinone. Heparin was replaced by lovenox. It’s also a shot, but half the volume, and only once a day. Her albumen levels were up a little bit, and on 1 liter of oxygen, her sats were at 90-92 all day. Milrinone seemed to be working, but she said she didn’t really feel any better. (Unfortunately, the only real test of the effects of that drug is how the patient feels. Sarah always feels worse at the hospital – who doesn’t? – so it was kid of hard to tell at this point.) Had a great visit from Grandma and Grandpa Brown in the middle of the day. Most of the afternoon was swallowed up with the PICC line. She was so upset and anxious about it when they came to check her veins (with ultrasound). The nurse on the IV team stuck around to explain and show her some things to help her feel better about it. The decided they could use some topical cream to numb the area, and give her some ativan to help her relax and ease her nerves. Music therapy was also scheduled to come before and stay through the procedure. They had a hard time getting it in, but it finally worked and all was well. (I have a really neat story to share about that experience, but it will have to wait for another time.) She doesn’t think the ativan helped at all, but a couple of hours later, she was so zonked we couldn’t even wake her up enough to eat! It was a really rough afternoon, so I was glad she had some help sleeping.

Day 4 in CICU / Day 1 in CSU – We both woke feeling pretty good with news that we’d be moved to the CSU (Children’s Surgical Unit on the 3rd floor) that morning. She was still groggy, but when she decided to take a walk to the restroom, we took the opportunity to wash up and change clothes! I practiced my beautician skills and washed her hair in the sink. (I’m not very good… she said it felt great, but I accidentally doused her shoulder with water.) Aunt Kathy and Uncle Richard came to visit and we made the journey to the 3rd floor. 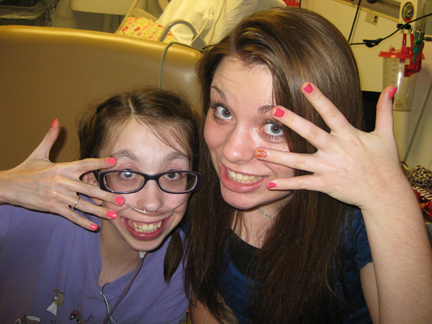 With all the familiar faces (one of her favorite techs) and the ability to have a little more freedom, she was like a new person once we got there. She was smiling, laughing, and acting like the queen of everything. She is so loved in that unit. Nurses stop by just to say hi when they hear she’s back. We had lots of visitors… her cousins Matt and Karly, my cousin Becky and her daughters and Grandma and Grandpa Dixon. Steve and Rachel also came down and the girls spent some time playing a game and then doing manicures. It’s always good for the soul to have sister time. Steve and I went for a walk to have an hour or so together before I left, and then it was time to say goodbye again. (That’s one of the hardest things about all of this…being apart. We don’t function very well that way, but it’s necessary, so we just do the best we can.)

I haven’t been privy to the ins and outs of the days since then. I’ll leave that to Sarah and Steve to fill you in. I do know that there has been some game-playing, song-writing, puzzle-making and relationship-building going on. Things are generally going well with the new therapies. Everyone’s still hoping for a release by the weekend.