I hope you have time, because this is a long one…
Today (Tuesday) I officially became the dreaded stressed out, frustrated and overly emotional parent of a child in the hospital. I have watched over the years how hard it is for the doctors and nurses to deal with difficult people and how it damages relationships. We have incredible relationships with these great people who do incredible jobs and I hate the idea of ruining that. But today with my emotions spent, I broke and wanted my frustrations acknowledged.
The last four days have been among the most difficult of my life. Seeing my little Sarah terrified as she slipped into the deep dark waters of confusion and pain. It has taken every ounce of mental and 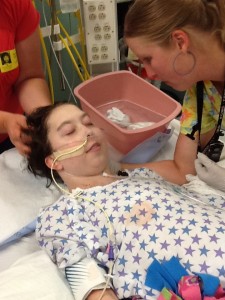 physical energy I could muster. I wake up in the morning already drained. Being exhausted has not helped in my ability to communicate clearly.
The day started better. Sarah was sitting up in a chair when I got back to her room. She was lucid and we had a nice conversation. Then she had her first slip back into the deep. However, she only dipped her toe in. It was short and I was able to bring her back quickly. Amanda from Music Therapy came and I thought it was perfect timing. She started to slip again but I told her she had to focus on Amanda’s eyes. They sang songs for an hour.
The psych folks came by and that’s when I started to fall apart. It was their observation that treating Sarah is a very delicate balance right now because they are to help her with this psychosis but she has these other underlying issues of panic and anxiety that was observed last week and it is coupled with the overall anxiety with procedures she has had her whole life.
Here’s the problem. First, I cannot connect the two. Anxiety over procedures is much different than anxiety that leads to a panic attack (which she has never had before last week). I am certainly not an expert in medicine, but I am an expert in Sarah Brown. She did have growing anxiety last week. Last Tuesday is when she started a new anti-biotic that we believe was the problem leading up to this. How can you base your assessment on how to treat someone when they are already suffering from side effects of a drug? I know there was no way to know that at the time. But to continue forward now that it’s in question is wrong. Following that logic, I could say the psychologist started working with Sarah last week and now she’s broken. Therefore this his fault. Well, that would be as ridiculous as treating her based on a false foundation. Please know I have the utmost respect and love for the people helping Sarah. But Doctor, please be careful in your assumptions of causality.
Now for our second problem. I assumed (and we know what that means) that since we entered the ICU with this psychosis problem, her care givers would notice when she was checking out and when I worked so hard to bring her back. Apparently, I needed to be more communicative. I needed to point out when and what was happening. It appeared to them, I guess, that I was just having intimate moments with her when in reality we were in opposite sides of hell together. In their eyes there was so much more improvement than Sarah was actually experiencing. I understand what happened and it’s no one’s fault, it was just beyond my ability to process in my current condition.
This led to 4 hours of pushing them to give her the drug that would give her some relief from her psychosis and help her get some much needed sleep. “Let’s just let her go to sleep and see how she does”. Except she can’t go to sleep because she is too scared to close her eyes because over that last several days her mind seeks up behind her and throws a wet burlap sack over her head.
In the end they relented and by 10:00 she was sleeping in a comfortable place. I still don’t know if they gave it to her because they believed she needed it or to satisfy me. Either way I know the guy without the medical degree hanging on the wall was right.
Sarah is better tonight than she was Monday night and she’s leaps and bounds over Sunday. We may never know what really happened here but she got bad when she started a new medicine and now that they stopped giving it to her she is getting better. I think I’m pretty confident in my assessment.
Now for a couple of more important events today. Fluid had built up in her right lung cavity making her breathing very labored. I watched her bed shake a little every time she inhaled and exhauled. This caused lower oxygen saturation of her blood which leads to less o2 getting to her brain which could contribute to her condition.
They tapped that fluid this afternoon and drew out 505cc, about 1/2 a liter. That is a lot of fluid in such a tiny space. She immediately felt better and they were able to lower the oxygen to her by 25%. What a relief to her system.
But the most important thing of the day happened when her Aunt Kathy came. She washed her hair, combed and braided it. She was in bliss. She loves having someone play with her hair. She was so relaxed.
I need you to know through this last experience, I would not have Sarah in a different hospital. I wouldn’t trade the people caring for her for anything in the world. Sarah has always taken to road less traveled. She has no normal. She is unique and independent. And really, I wouldn’t have it any other way. We are better because of her.
A woman from the “staff” silently slipped into the room tonight. (I don’t want to get anyone in trouble). Sarah’s eyes were closed. She just stood there quietly watching over her in the dimly lit room. After some time, she explained that Sarah was her friend. Always saying hello to her. Making her feel important. She told us she was “working” in Sarah’s room one day when Sarah was recovering from some procedure and was still out. The nurse said, “Sarah knows you”. “Oh, I don’t think so”. “Yes she does. Look at her smiling at you”. After asking Sarah if she was okay, she opened her eyes, smiled and gave her a thumbs up. At that moment, in her condition, Sarah made her the most important person in the world.
-Steve