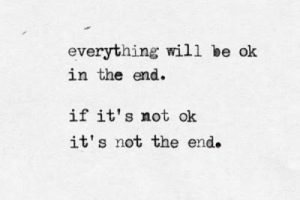 My blog is basically my journal, right? In journals, we’re asked to record life experiences and the thoughts and feelings that go with them. So, here it goes: One month ago, today, my whole world got torn away from me. I didn’t know which way was up. I didn’t know how I was going to survive. I didn’t know what to do…or where to go. I just knew that I couldn’t be there anymore. I called my cousin and between sobs, I asked if she would be able to drive down and come get me. I am so blessed with such a wonderful best friend! She (and her husband) dropped everything to come pick me up. They told me that I was going to spending the weekend with them. We drove to Salt Lake to pick up some things that I might need and then we went back to their apartment where I spent a wonderful weekend with them. It worked out both ways. I wasn’t alone and they had a little extra help moving!

Here’s some thoughts that I’ve written down during the last month:

May 7, 2017 – “…When I told Mom and Dad, Dad told me to write down my thoughts and feelings during this experience. He also told me “this situation happened the way it happened because of who I am and because of my character. I am strong.” It doesn’t feel like that right now though… I’m hurt, broken, angry, confused, sad, relieved, and terribly numb.”

May 8, 2017 – This breakup hurts. It hurts like nothing I’ve ever experienced before. I wouldn’t wish this heartbreak on anyone. But, as my day has gone on, I’ve been able to discover blessings that have come because of it… There’s ALWAYS blessings.

May 9, 2017 – I got back to my apartment today from spending the weekend with Shannon and Jesse. Everything that I can think of (that’s here in Salt Lake with me) is in one of two boxes. One box is his stuff that is going back to him and one box of everything that belongs to me but has memories tied to it (like jewelry he’s bought for me). I’m keeping my box at my parents’ house until the sentimentality isn’t connected to the stuff anymore. I’m going to see if his cousin could give his box to him…  I had an extra jump drive that was empty so I went through my phone and computer and transferred ALL my pictures to it (no deleting). I had over 1500!!! That jump-drive is now in my box. His box is on the top shelf of the coat closet in my apartment and mine is under my bed until I can ship it back home. It’s weird going though my stuff, knowing that some of my favorites won’t be in my possession anymore (like a worn out hoodie that I borrowed from him once). I got home tonight and Charlotte was here! It was so wonderful to have her here while I did all of that. This whole thing has kind of been an “out of body” experience. I know what’s happening and I’m trying to cope, but I think I’m still in shock and will be for a while.

June 2, 2017 – It’s almost been a whole month. He told me that he wanted me to be happy and he knew that me staying with him isn’t what would make me happy. He made me promise him that I would find someone who knew how special I was and would treat me better than the way he treated me. He told me a was precious. He made me promise him that I wouldn’t fall for anyone who didn’t realize it. Right after we got engaged (a year ago) I started doubting the whole relationship. I’d pray about what to do but the answer was always, “this is what you need right now” so I just went with it. That has been the answer every time I asked… “It’s what you need right now.” About a week before I moved back to Utah, I got out of the shower and put my ring on (like always) but this time it felt weird on my hand. When I gave it back to him this wave of relief washed over me.  I know Heavenly Father allowed him to be a part of my life for that long for a reason. I miss him. I miss that friendship and companionship  and it hurts but I’m actually okay. I’ve learned lots of things because of it. I now know what I want and what I don’t want in my next relationship. It hurts sometimes but I’m busy with school and friends. They make great distractions. It hurts but I’m okay. That kinda has become my mantra. It hurts but I’m okay. I hurt because in the last two years, I had my future all planned out – with my sweetheart right beside me, but because of my faith in My Father and His plan, I know it’s going to work out, so, I’m okay.

It hasn’t been easy. Sometimes I’ll sit too long and get stuck in my own head. It still hurts. I don’t think it’s never NOT going to hurt. I’m slowly doing better. Every day is better than the last. I know that there is someone out there for me. One day, I will meet him. He will love me and I will love him. We will become inseparable. He will take me to the temple and there, together, we will be sealed forever for all eternity. Because of those special promises, our family will be mine forever. This knowledge gives me hope. Doctrine and Covenants 24:8 says, “Be patient in afflictions for thou shalt have many but endure them, for, lo, I am with thee, even unto the end of thy days.” I’m so grateful for my Father in Heaven. I know He’s there. I know that he loves me. He knows who I’m capable of being. For me, it’s hard to figure out who that is, but I know that He knows. He knows what I need to struggle through to be the person I can be.