After almost a year and a half of living in Salt Lake, I finally have a job. On top of that….I ABSOLUTELY LOVE IT!! I work at Claire’s in the City Creek Mall. Its about a ten minute walk from where I live so that’s nice. I have been learning how to open, ring up customers, do returns and exchanges, report damages, piercings, freights, deposits/bank stuff, and close. It’s been super fun. Since I’ve started, I’ve had the opportunity to work 9 hour shifts, slow days, really busy days, and normal days. I can’t decide which days or hours I like best. They all have they’re own pros and cons.

The girls I work with are so great. They are all super sweet and helpful when I have questions or mess up. I really love working with all of them! We all have different personalities, obviously, but we get along pretty well together. (I haven’t experienced any drama yet… Haha!) We were having a conversation the other day about how different all of our styles are and how great that is for our clients. If they know what style they are looking for, they can come and talk to the one that has similar taste. It’s cool.

I have pierced so many little ears already, too! On one of my shifts, a little sister of someone I was piercing pointed out to her mom that I didn’t have my ears pierced. Another time, a little girl asked if it hurt to get the earrings put in. And another little one asked how old I was when I got mine pierced. Last week, I decided that I probably should get my own ears pierced… I told my co-worker and she got so excited. She told me that she wanted to be the one to do it. The next day, an older girl came in to get hers done. I asked her how old she was and she replied, “14.” I smiled and said, “You’re going to have to tell me if it hurts… I’m thinking about getting mine pierced soon.” She asked how old I was and I told her that I was 22. She giggled and told me that she would report back. With that, I finished her up and she wandered around the store for a little while. When she was done, I met her at the register to ring her up. I asked how they felt now. She told me that they were a little sore but that it was worth it and that I defiantly should do it! That was it. I figured, if I can have millions of shots/ivs/pokes, chest tubes, and a freaking heart transplant, that I could handle a dinky little piercing gun. I was going to do it last weekend (all six of us were there and the others wanted to watch and be moral support) but I remembered that I had a biopsy that next week. So now the plan is to have Maddie pierce my ears this weekend when the store gets slow! Yay!!

School is still going well. I really like the two classes I’m in. Megan is leaving to go back home when the semester is over. She got her mission call!! She’s going to Paraguay! I am so excited for her, but I sure am going to miss her. 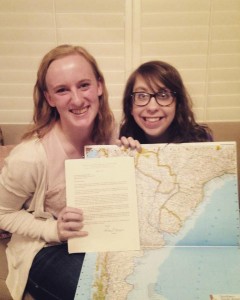 With her being gone, I will get a new roommate. One of my best friends from Idaho is coming down to start the med program at LDSBC, so we’re both hoping she’ll be my new roommie. If not, fingers are crossed that I will get my own room which might actually be good because I’m never going to be home. I signed up for 10 credits next semester plus I’ll be working part time. Hopefully I won’t die. Haha.

Lewis and I are still going strong. We celebrated our first year anniversary last month. It’s crazy how fast time goes when you’re head over heals in love with someone. I still get butterflies in my tummy when he smiles. Sure love him lots. 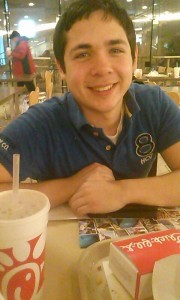 So, there’s a quick update on my life. Have a fabulous week!! 😀

Warning! The title is very accurate. Best be getting the tissues out and ready.

One of my classes I’m taking this semester is Jesus Christ and the Everlasting Gospel. It’s been such a fun class. I love studying the words that teach of Christ. I have felt that as I’ve studied the life of my Savior, I have defiantly come closer to Him.  In preparation for Tuesdays’ class, one of the assigned readings is to study Elder Holland’s talk None Were With Him given in the April 2009 conference. I just have to say, this is one of my favorite talks! I just love it so much! I can’t tell you how many times I have studied and learned something new each time. If you haven’t read it yet or even recently, I encourage you to clink on the link and go read it now!!

As I said before, I’m not sure how many times I have read and studied the teachings in these amazing words. On the way home from church I was prompted that I should do my religion prep today instead of waiting until tomorrow. I’m not sure why I was prompted to do it today but I’m so grateful that I listened to the Spirit! I just wanted to share some of the insights that I found today while reading.

Elder Holland says, “His sweat came as drops of blood as He pled with the Father to let this crushing, brutal cup pass from Him. But, of course, it could not pass.” This really stuck out to me because I have a personal witness to this exact thing. I remember as I was preparing to be listed for my angel heart, there were several times I prayed and even pleaded to my Father in Heaven asking Him to take it away. I knew that He had the power to do just that. I thought that if He did love me, He wouldn’t want me to hurt anymore and take it away. Well, obviously that’s not the case. Sometimes our trials and burdens seem too hard to carry. More often than not, we will ask our Heavenly Father to make it go away or just make it better. Because He does love us, our Father will sometimes tell us no. It can be hard to understand how that is showing us love but He tells us no because He knows how things will turn out. He knows who we have the potential of becoming. He will tell us that we need these hard things because it will turn us into a better person…and closer to becoming like Him.

“Now I speak very carefully, even reverently, of what may have been the most difficult moment in all of this solitary journey to Atonement. I speak of those final moments for which Jesus must have been prepared intellectually and physically but which He may not have fully anticipated emotionally and spiritually—that concluding descent into the paralyzing despair of divine withdrawal when He cries in ultimate loneliness, “My God, my God, why hast thou forsaken me?” With all the conviction of my soul I testify that He did please His Father perfectly and that a perfect Father did not forsake His Son in that hour. Indeed, it is my personal belief that in all of Christ’s mortal ministry the Father may never have been closer to His Son than in these agonizing final moments of suffering. Nevertheless, that the supreme sacrifice of His Son might be as complete as it was voluntary and solitary, the Father briefly withdrew from Jesus the comfort of His Spirit, the support of His personal presence. It was required, indeed it was central to the significance of the Atonement, that this perfect Son who had never spoken ill nor done wrong nor touched an unclean thing had to know how the rest of humankind—us, all of us—would feel when we did commit such sins. For His Atonement to be infinite and eternal, He had to feel what it was like to die not only physically but spiritually, to sense what it was like to have the divine Spirit withdraw, leaving one feeling totally, abjectly, hopelessly alone.”

As we go throughout our lives we sometimes feel like we are alone. Absolutely and utterly alone. “No one gets it.” “How could they?” “They haven’t experienced what I have…” Trust me, I’ve been there. I know that Christ suffered in the garden truly alone so I would know that I have never and will never be alone.

Christ’s atonement is so important to me.  I have had several opportunities to use His glorious power to help me overcome my trials. Every time I think about Christ suffering in the garden for me, I am overcome with an enormous amount of gratitude. Last week, Sis. Wixom (yes, THAT Sister Wixom, the General Primary President) spoke at the devotional. She told a story about a primary class full of busy little boys. One week, the teacher figured out who the “ring leader” was. She quietly went over to this little boy, put her hands on his cheeks and whispered, “Jesus suffered and died for all of us. But if you were the only one, He still would have done it.” That thought really hit me. I have thought about it like that before but for some reason, the way Sister Wixom said it made me actually consider how much my Savior loves me. I know that this sacred act was part of the plan of salvation. I know that without His Atonement I can’t go back to live with my Father again. I am so grateful for that Christ had the courage to say, “If my not my will, then thine be done. Matthew 26:39“