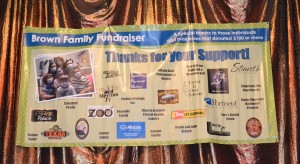 I really should have written this post a long, long time ago. I was so overwhelmed with the feelings of love and gratitude, I didn’t know what to write. Then waiting for pictures from a friend became my excuse… and then, well…life happened, and the fundraiser ended up on my list of “incredibly nice things people did”. The community fundraiser was such a huge help during our journey that we created a special page for it. (Plus, there were way too many special pictures to put into one post!) You can click the “Fundraiser” tab at the top of the page, or this Fundraiser link will take you there. If you know of any amazing stories that happened behind the scenes, we would love for you to comment and share them. Miracles happen every day. Please take a few minutes to look through the pictures. See if you can feel the love in that room…like we did!

P.S. There were so many people that were involved in this amazing event. I didn’t name any names, for fear of leaving a couple (hundred) out. You know who you are, and from the bottom of our hearts…we love and appreciate you. 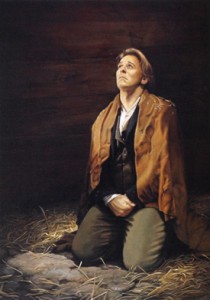 The second incredibly nice thing someone did that I wanted to write about was Sarah’s Deseret Book Gift. When I came home after Memorial Day (2013, when she was suffering so much with the ICU Psychosis, infection, and psychotic reaction to Levaquin), I went into Deseret Book at the mall. I wanted to get her a copy of her all-time-favorite painting by Liz Lemon Swindle, “Of One Heart: Joseph In Liberty Jail”. It has come to mean so much to her and given her much strength in the past, and I thought it might be a good birthday gift to help give her perspective through her recovery. (You can read about what this painting means to her in her own words, posted September 2012.) As I was sorting through all the prints, a nice smiling lady with a name tag that read “Debbie” came back and asked if she could help me. I told her about Sarah, her recent heart transplant and the hard time she was having lately, and that I was looking for that specific print to get her for her birthday. We couldn’t find one in stock, so she set me up on the website at the computer at the counter to search while she helped some other customers. We found just one, a 5×7 print, that could be ordered, but probably not in time for her birthday.

Throughout our conversation, Deb told me that her daughter had also spent a lot of time at Primary Children’s over the years including several brain surgeries. This daughter has since become a nurse and works at our favorite hospital. She told me she would like to buy the print for Sarah, and give it to her as a gift from a stranger that had walked a similar road. I, of course, objected, and told her she that was kind, but that it was not necessary. Deb looked at me in the eyes–actually straight through me–and told me that when her daughter spent so much time in the hospital, the love she felt from people around them (especially the strangers) brought so much strength. She had promised herself that anytime she could, she would do kind things for people who were walking that road and needed a little love. Of course, the tears flowed freely and that stranger, my newest friend, hugged me long and tight–right in the middle of the store. I thanked her and gave her my phone number so I could come pick it up when it came in. 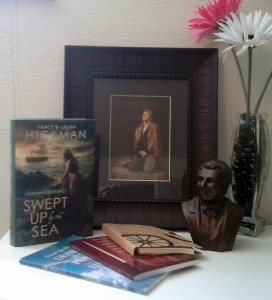 About a week later, I got a call from Deb that they had worked some magic, the print was in, and she (and her manager, Chris) were having it framed and putting together a whole gift bag for Sarah for her birthday. She wanted to make sure it would be ready in time. I couldn’t believe what I was hearing. It was overwhelming that the love of strangers could fill up empty spots in my heart I didn’t even realize were there. It was an incredible surprise and gift, and I was excited for Steve to pick it up the next day and bring it to Salt Lake with him just in time for her birthday celebration.

When she opened the gift bag, she discovered not only the painting she loved so much, but a wooden bust (also of the Prophet Joseph Smith), a novel, a couple of smaller inspirational “talk” books, a journal, and some other treats and little things. (Since it’s been so long, we honestly can’t remember exactly what else was in there… probably a Utah truffle bar or some other treat, lip balm, maybe a pen….) It was so generous, so kind, and so thoughtful. I told Sarah the story about what had happened, and that the gift was from Deb and Chris at Deseret Book, and she was just about as amazed as I had been. It was another simple gesture that was such a huge strength for the Brown family.

I saw Debbie at Deseret Book again just before Easter, almost a year later. I reminded her about Sarah and thanked her again for gift that they had sent. I gave her the happy report about Sarah’s one year anniversary coming up in just a few days, and how well she was doing with her new heart. She hugged me hard again, and told me how very grateful she was to hear such wonderful news. This time both of our eyes were welling up with tears as she stood at the register and took care of my purchase. There are such wonderful people in this world, with good hearts so full of love. We feel very blessed to have “run into” some of them along the way throughout this incredible journey.

Welp, so much for weekly posting! Ha! I will try to blog more though… I promise.

(Even Tom Hiddleston is happy for me! :D)